I have a strange relationship with fennel.  Although I'm not a big fan of the licorice/anise flavor, Mr. Minimalist is.  So, for his sake, since he puts up with so many of my food experiments and eats all the "girly" food I often put out, I decided to take up with fennel and see what I could do with it.  In years past, I have used it with success in only one dish (a fish dish by Martha Stewart, of course).  A couple weeks ago, I mentioned that I would be trying out a fennel and sardine pasta dish.  It did not go so well.  It was fishy and murky and not yummy at all.  But this week, I tried another fennel recipe and with great success! 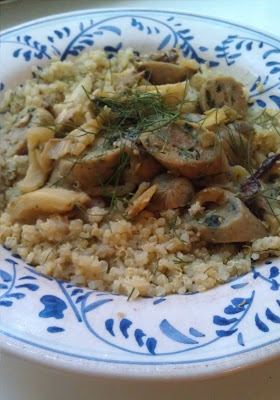 This dish is based on a recipe by Lidia Bastianich (of "Lidia's Italy" fame).  I varied it a bit to suit the ingredients I had at hand and it turned out great.  My version involves a little short cut of buying the sausage precooked, so the order of operations was a little different from Lidia's dish.  Plus, by using quinoa as the underlying "grain" (really it's a seed... how cool is that?) I upped the protein/nutrition power of this dish.  Mr. Minimalist loved the dish, as did I, and it's quite healthy and guilt free.

This recipe makes a nice filling but light dinner for four.  If you are super-size me kind of eaters, you might want to double the recipe, that way you'll have more than enough for dinner and leftovers.

A trick I read somewhere to make cooking less stressful is to prepare everything ahead of time. So, before you turn on the saute pan, do the following: peel and crush the garlic, pit and crush the olives (I did these two steps using a meat mallet... very satisfying!), and chop the fennel. The best way is to remove the stalk and the hard base, then cut it in half and cut out the core. Then slice each half again, and slice into 1 inch pieces. In my case, I also used frozen cooked sausages, so I defrosted them in the microwave while I chopped, then sliced them on the diagonal.

Start the quinoa.  Rinse it well in a fine sieve under cold water for at least 20 seconds to remove the bitterness.  Combine the rinsed quinoa and the water in a pot with a tight lid and bring to a boil.  Turn down the heat, keep the lid on, and simmer the quinoa for 15-20 minutes until tender and translucent.  Toss the cooked quinoa with a tsp of olive oil and the fennel fronds and dill (reserving some for garnish).

Once the quinoa is cooking you can start on the rest.  Heat 2 tbsp olive oil in a large saute or frying pan.  Saute the garlic for a minute over medium heat until it starts to brown.  Add the crushed pitted olives.  Cook for 2 minutes, stirring frequently.  Add the chopped fennel.  Sprinkle with salt, cover, and cook over medium heat for 20 minutes, stirring occasionally.  Towards the end, add 1/4 cup of apple juice and the apple cider vinegar.  The fennel should be caramelizing, so you should see it change color a bit and soften a great deal.  If the fennel is still hard after 20 minutes, add the remaining apple juice and cook until soft.

Add the chopped sausage and continue to cook over medium heat, uncovered, stirring occasionally, about 3-5 minutes more, until the flavors have melded and the sausages are glazed.  Serve over the quinoa and garnish with fennel fronds and dill.
Posted by Unknown at 11:53 AM