Tomatoes + Parsley = Quickest Pasta Recipe Ever (p.s. your toddler will eat this!)


I don't think you can possibly find a quicker pasta recipe than the one I am about to lay before you.  Aside from opening up a jar of something, this has got to be it.  And, it's much more satisfying not to mention delicious. 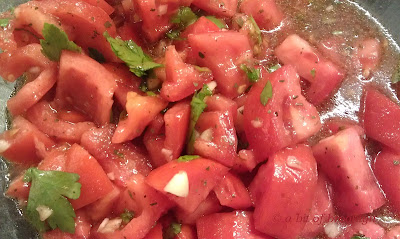 It's a great way to use those beautiful tomatoes that are spilling off the stands at the farmers markets these days.  If the heirloom varieties weren't $4/lb at my local farmers market, I would totally have used them.  Instead, I got the cheaper plum tomatoes (a mere $1.50/lb).  They didn't disappoint.  The tomato flavor really sings in this dish, and you can appreciate the fresh taste since the tomatoes stay raw.

The secret, I think, is that by tossing the warm pasta with the sauce, the pasta drinks in all the flavors and what you end up with is something savory yet refreshing.

So here it is.  Make it while the pasta cooks. 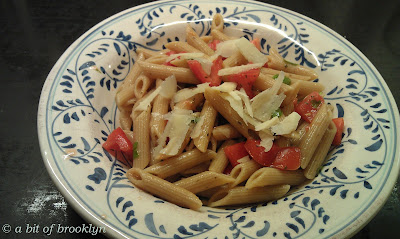 Ok, so it's a little more than just tomatoes + parsley, but it takes minutes to make!  If you make this in the summer, use as much fresh basil as suits your taste.  Since we're well into fall here, I chose dried basil.  Adding fresh parsley, which I keep in a pot on a sunny windowsill, brightens up the dish and kind of fools you into thinking the basil is fresh too!

Start boiling the water for the pasta.

While you're making the sauce, add the pasta to salted boiling water and cook according to package directions.  While the water is boiling/pasta is cooking, your sauce will have a chance to set.  Drain cooked pasta and immediately toss with the sauce. If you like, top with shavings of parmesan or pecorino romano.  Enjoy!

UPDATE: Toddler Alert!  My super picky eater / toddler extraordinaire ate this all up!  So for all of you out there trying to shove food into your toddlers or other picky eaters at your dinner table, try this!