"Happy Purim! The most joyous holiday of the year!"

So says the book "Good Night Israel" that we have read to the Little One every night for the last week.  The book says good morning, good evening and good night to many different places and people in Israel, and touches on the Jewish holiday Purim, showing kids dressed up in funny costumes, making noise and having fun. 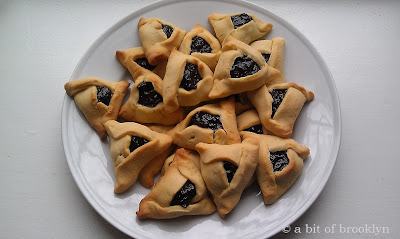 On the next page there is a picture of kids making hamantaschen, the triangle fruit filled cookies traditional to Purim.  On that page, the book asks, "Would you like to help make hamantaschen?"  And dear Little O, she always answers with a resounding "Yes!"

I had the Jewish equivalent of visions of sugar-plums dancing in my head.

The trauma began with my electric hand mixer,
which scared the living daylights out of Little O (as most loud appliances are wont to do these days) and I had to old school it with a wooden spoon.

There was a brief sweet moment where she was in her high chair rolling out the dough as I was doing on the counter next to her... but then when I tried to show her how we fold the circles into triangles, she protested loudly, insisting that the cookies remain "open, open!!!"

I finally gave up, and made the remainder of the cookies during nap time.

They turned out beautiful, just like I had hoped, even if the experience did not live up to the dream.  Granted the child's not even two yet :)  Maybe next year!

Hope those of you who celebrate had a great Purim... see below for a hamantaschen recipe if you're getting a late start, or are looking for a new recipe for next Purim :)

I did not reinvent the wheel on this one, but instead found some great recipes by some other bloggers.  I absolutely adore the hamantaschen dough recipe that I found on The Boreka Diary.  She has some great tips there for how to handle the dough, and the proportions I found to be just right.  I also found a pretty good prune filling, or lekvar, recipe on The Shiksa in the Kitchen.  Follow the links for the recipe as I followed it.